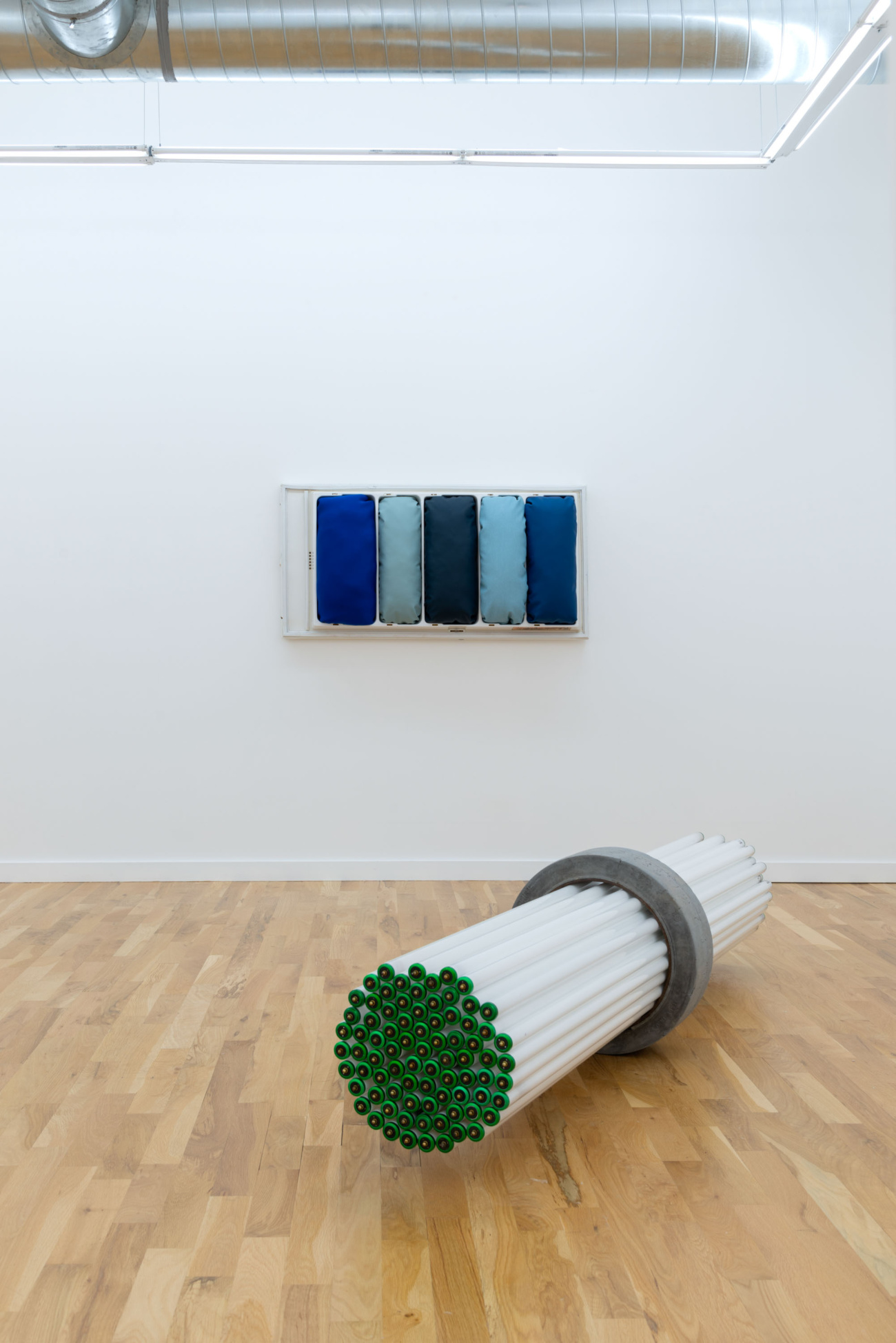 DOCUMENT is pleased to announce Kiah Celeste’s first solo exhibition at the gallery and the artist’s first presentation in Chicago.

“Life today is very bewildering,” the textile artist Anni Albers wrote in 1938. “It is no accident that nervous breakdowns occur more often in our civilization than in those where creative power had a natural outlet in daily activities. And this fact leads to a suggestion: we must come down to earth from the clouds where we live in vagueness, and experience the most real thing there is: material.”

Life today, in 2022, remains as bewildering as ever, yet All the Best, Kiah Celeste makes a compelling argument for coming down from the digital clouds and experiencing what Albers would call “the adventure of being close to the stuff the world is made of.” In the half-dozen sculptures Celeste created for the exhibition, material is the adventure, evidence of a tactile thinking that can excavate aesthetic pleasure from the rubbish heaps of contemporary industrial culture.

Some artists begin with an idea and procure the materials to create it, resulting in works that often look pretty much like the visions in their heads. Celeste’s process is much more precarious — with results that don’t so much reward her riskiness as reflect her skillfulness in teasing out relationships among forms and materials, imbuing the overlooked and invisible with purpose and significance.

Celeste is a forager, scrounging the neglected corners of her urban environment for objects with which she feels an aesthetic attraction, but without knowing how she’ll incorporate them into her works. She rarely combines more than three or four elements in a single piece, though she often repeats a particular form, such as a steel pipe or rubber wheel, to create a visual rhythm of theme and variation. This minimalist ethos is amplified by what is left out: joinery, fasteners or any other kind of stabilizing device. Instead, Celeste manipulates the inherent properties of the objects to compress, abut, lean, lever and cantilever her sculptures into a natural, if tentative, balance.

Celeste has worked in this manner since early 2020, when she started a series called I Find This Stable. At that time, Celeste’s sculptures exuded a playful quality: rubber exercise balls featured prominently, as did pink pigment and comically undulating vacuum hoses; one piece, which included an inert light bulb inserted into flagpole weights painted baby blue, was titled “Max Wall” after the famously flexible English comedian. The following year, she began incorporating fabricated components to her work, sewing rectangular bags of vinyl and latex in various shades of brown, green and beige and filling them with sand. Slumping and unstable, the sacks suggested bodily forms, a physical vulnerability in the midst of an ongoing pandemic and continued violence against Black and Brown bodies.

With All the Best, Kiah Celeste, the artist maintains a delightful capacity to amuse herself and her audience — one needs look no further than “Bum 81,” a collection of linear fluorescent light bulbs with vibrant green tips rolled in a lavender-grey rubber wheel to resemble a giant cigarette, a loosie for an imaginary giant who lives among the rubble of an abandoned industrial park, perhaps. And yet these recent works also espouse a different intensity of elegance and restraint, a newfound sense of pleasure and, at times, a sumptuousness that belies the materials’ proletarian origins.

Take, for example, “Bow,” with its long, tall, skinny metal pipe that, in a softly curved right angle, reaches out and over the horizontal radiator tube that holds and anchors it. Celeste, abandoning the use of pigment for this exhibition, has covered the pipe in a tight sheath of creamy upholstery vinyl. In its haute couture costume, the once-discarded metal now holds itself with an air of luxury, a metamorphosis wrought from a working-class textile.

A single square of colored vinyl similarly transforms “Squared Circle,” forming the base for a cube of glass that rests on a larger square of safety glass. Light brown sand surrounds the edges of the cube, as if spilling out from under it; a layer of sand, about an inch thick and impressed with a small gridded pattern, rests on top of the cube. As light streams through the four sides of glass, the royal blue vinyl casts a regal glow; the sand reads as gold, not brown; the gridded surface like tufted velvet.

Sand appears elsewhere in All the Best, Kiah Celeste — the playfully minimalist “Silly Snakes,” for instance — but only in “Squared Circle” does it become an idea in itself, rather than a buttressing element. If Celeste’s sculptures can be seen as artifacts from her “adventure of being close to the stuff the world is made 0f,” sand is stuff reduced to its most elemental: these tiny, ancient grains, weighted with history and at the same time ready to be remade yet again — to be pressed into pattern, molded into form or even melted and transmuted into the sheets of glass that hold it in “Squared Circle.”

At a time when life can, indeed, feel “very bewildering,” it is a comforting thought that it all might yet be an adventure and not a catastrophe. It’s tempting to respond to periods of uncertainty by imposing more order — scheduled working hours in the absence of an office routine, or an overly regimented diet when sweets have proven to be an irresistible indulgence. But what if we instead resisted the urge to want things to be a certain way? Could we find, as Celeste has done, that there is great joy to be found in working with what we have been given? Perhaps then we could “experience the most real thing there is” — not material, as Albers would have it, but rather the satisfaction of discovering the stuff that attracts us and brings us pleasure; to be as malleable as sand, and just as open to possibility. 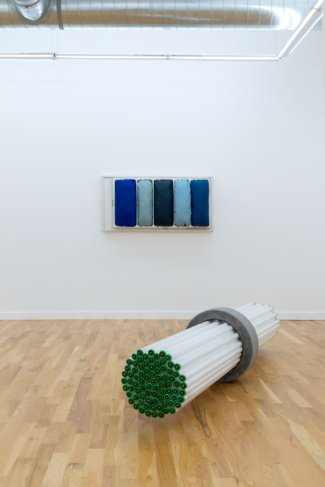 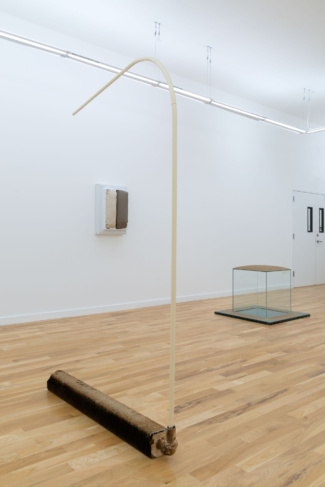 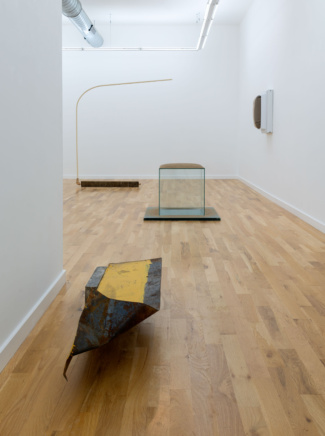 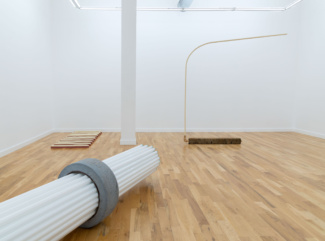 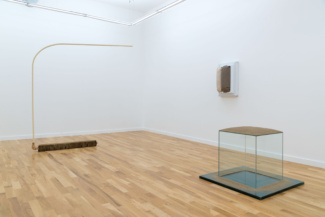 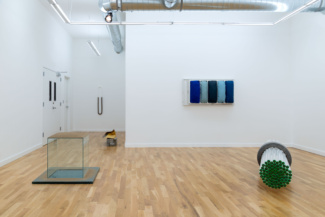 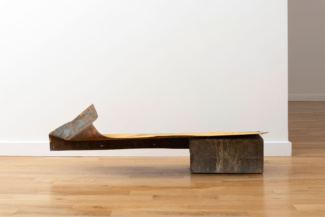 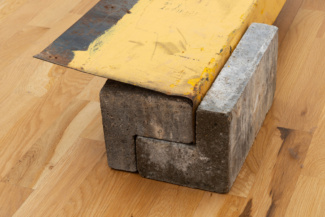 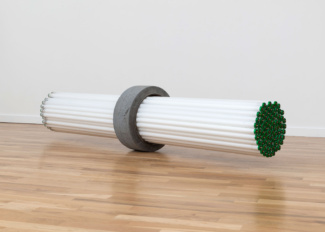 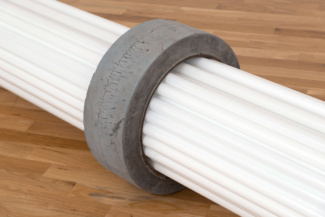 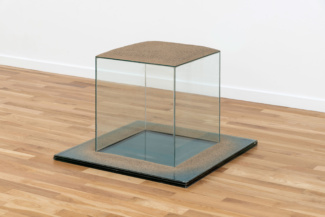 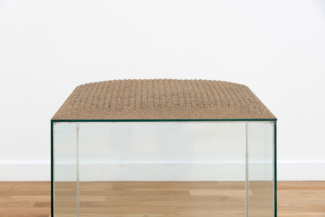 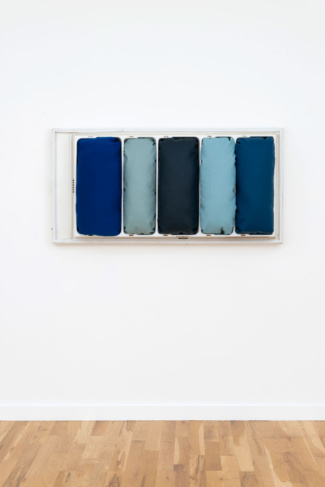 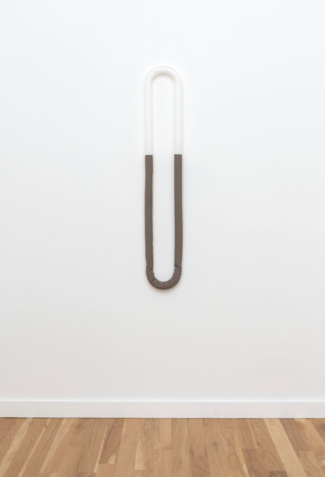 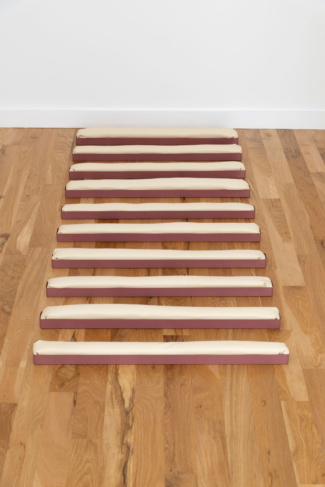 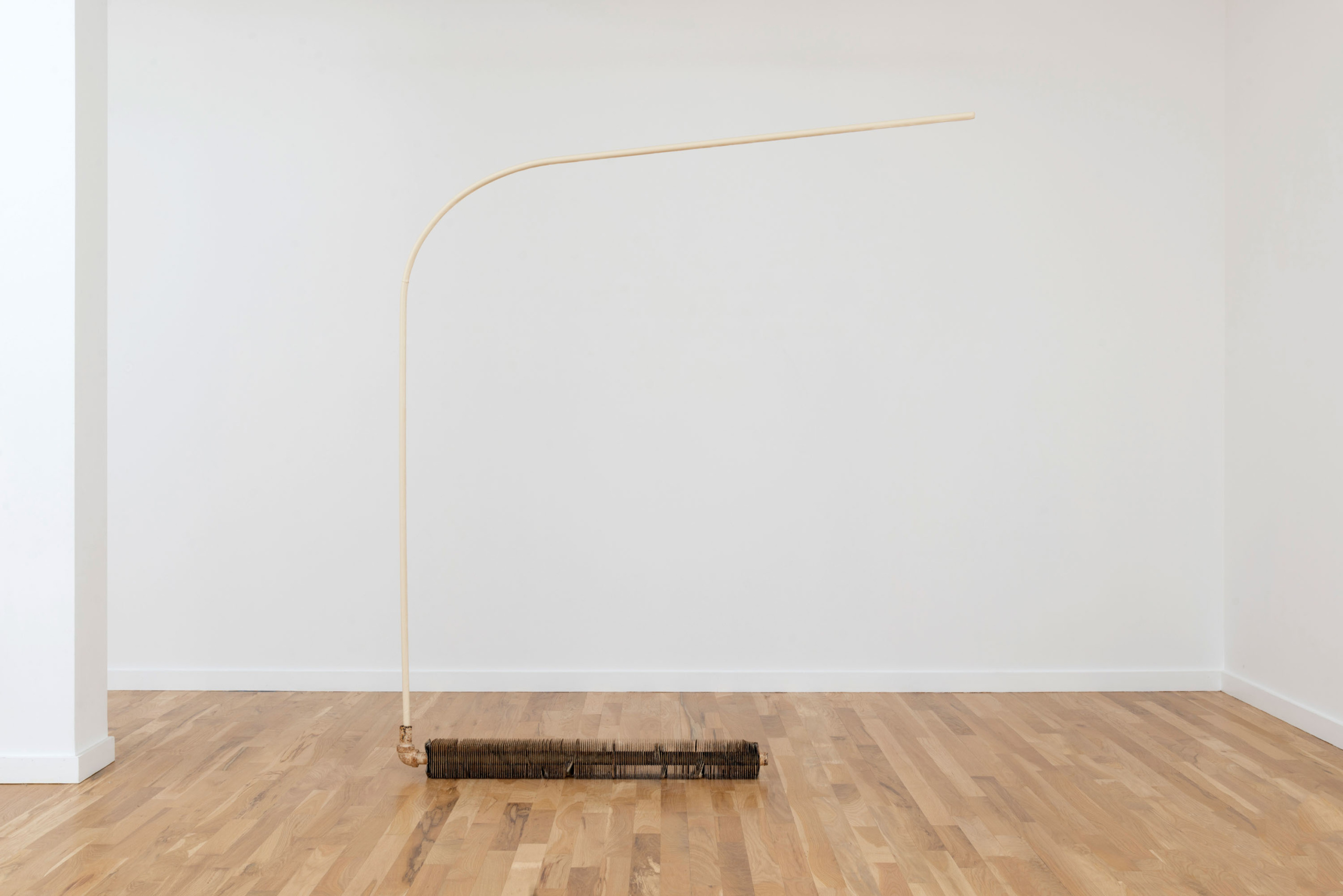 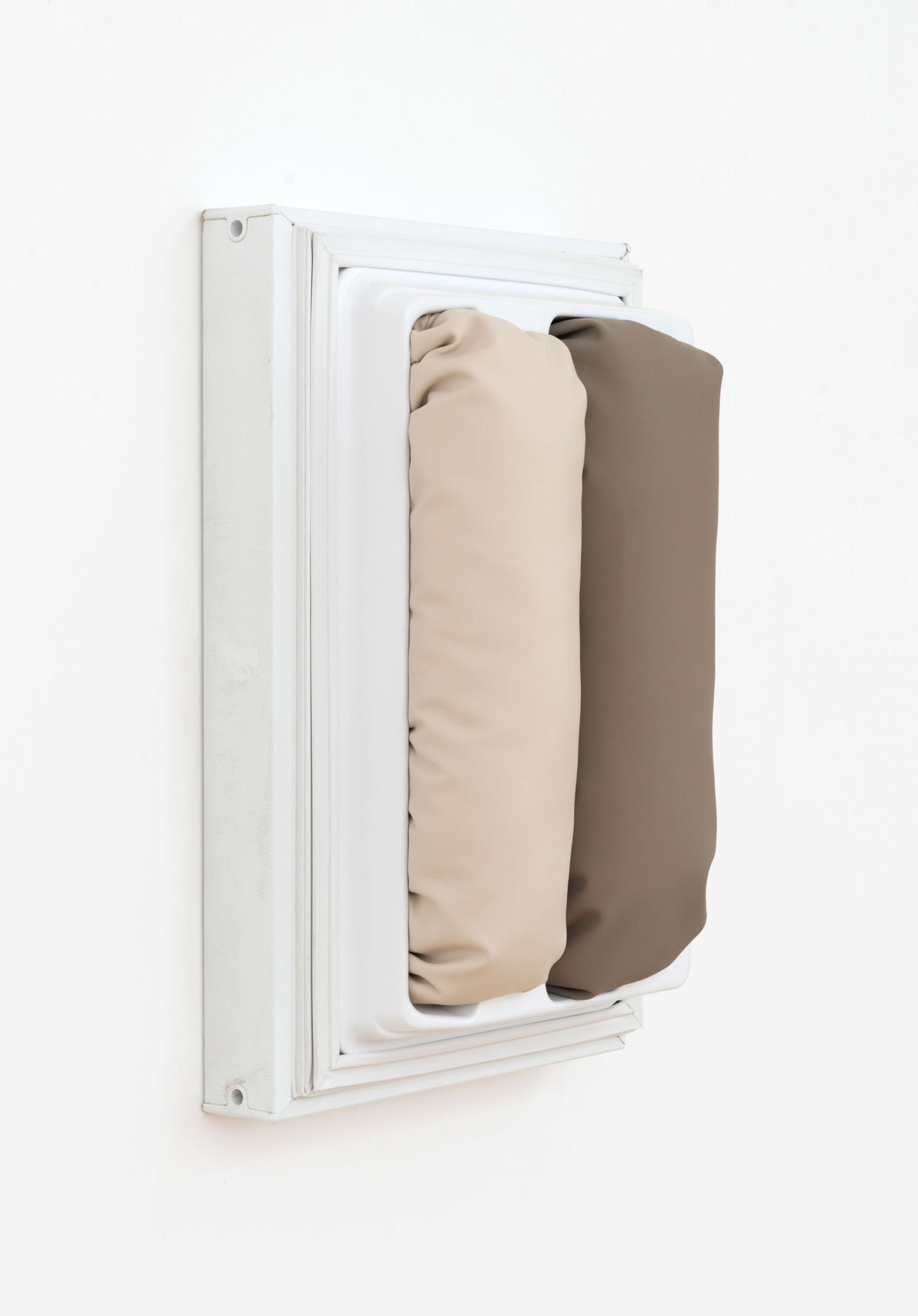 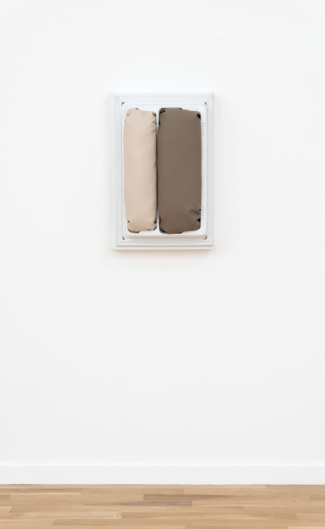