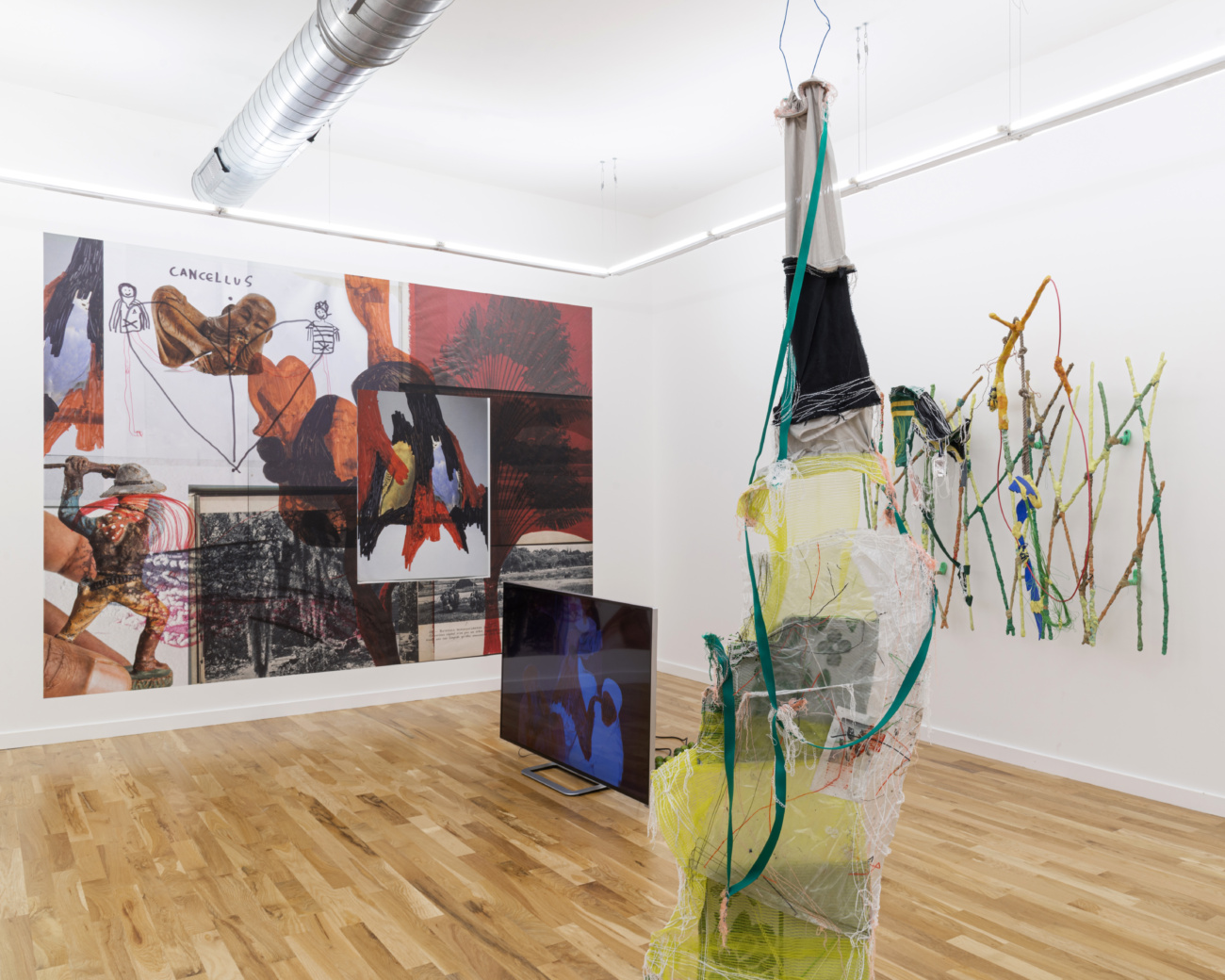 redness on the skin

head in a bucket of water

i would like you to see me as i am

in the meandering ocean

the lights are distilling

the men get together

Caught in a double bind: between trade and gifts in the work of Julien Creuzet

“But is not the gift, if there is any, also that which interrupts economy? That which, in suspending economic calculation, no longer gives rise to exchange?”

“With the farthest star, I begin the offering. And it reminds me that I intended to associate it with the argument of this book: between the acoma tree and the Fomalhaut star, I saw the same river flowing through the spaces.”

Melted plastic, ripped fabrics, stretched-out ropes and twisted wires: the innumerable materials and objects that Julien Creuzet gleans and uses in his work form a tentacular inventory of arcane, living and artificial things. In the large swath of humble and precious treasures that Julien sources and collects, some are easily recognizable, such as the blue handles of an IKEA bag, while others, such as the worn-out white part of a French flag, may require attention and time to be distinguished. These heterogeneous elements are intertwined in his sculptures, either weaved together or knotted around each other. Hanging on the wall or suspended from the ceiling, they compose hybrid forms that are often punctuated by some geographical markers.

In a sculpture created specifically for his second exhibition at DOCUMENT and titled The dust these days is our history, locked in our skulls, cavities, never let your hair drag, never eat red beans, never turn around, the night was restless, we knew, not open our eyes fruits , rotten, empty cavities., a sheet of translucent plastic sheet overlaps with a yellow synthetic fabric (likely ripped from a reusable shopping bag) and a piece of green plastic mat. While this composite ensemble may seem puzzling at first, the material and geographical origins of its components are telling. Here, a piece of plastic is juxtaposed with an African woven mat—a recurring element in Julien Creuzet’s work. The mat, which is sold as emblematic of an authentic craft and a specific geography, contrasts with the globally mass-produced plastic—undoubtedly the most toxic material that contaminates the African continent, the artist’s native Martinique and other Caribbean territories, also known as Overseas France. Composed of material fragments and remnants from various commodities, Julien Creuzet’s sculptural assemblages evoke detritus. In reality, they tell stories of past and present economic circuits of trade and its possible harms: the trade that is part and parcel of colonial histories, one that which is fueled the global food, clothing, and electronic economies governing today’s reality.

But while trade is addressed in Julien’s intricate work, we could also navigate his practice through the notion of the gift—”that which interrupts economy,” to quote Jacques Derrida. Although many of the objects picked by the artist resonate with the sociopolitical failures and ecological damages enacted by colonial trade and global economies, some of the most discrete elements in his work reside outside of the violent circuits of trade. Entangled with the detritus left behind by these forms of trade are gifts that the artist has received from caring strangers or old friends. Julien cherishes them, for their aesthetic power and for their sentimental value. As gifts, they forever hold the imprint and emotional connection of the giver. The gifts carry the giver’s hope that the artist would transform the gifted object. These presents may not always be discernible as such by the viewer, but their presence imbues the works with a living energy.

It is not surprising, then, that in the central sculpture of the show, the gifted object overlaps with the heart of the work, animating it with energy. Pieces of melted plastic are dyed, squirmed, and twisted together, tracing two large forms: a mint green toucan beak on one end, and a bright pink crab claw on the other. Vulgarly labeled as “exotic animals,” the toucan and the crab are both emblems of strength in the systems of heraldry—the toucan appears on the coat of arms of the Kourou province in Guyana, while the crab is an emblem of the French department of the Maritime-Alps. In Julien’s aforementioned sculpture, at the center and in between the formidable beak and the piercing claw, lies the core and heart of emblems of strength and heraldry: a tiny silver seal engraved with a star—Morocco’s national emblem—holds the leaves of a pineapple, which is the only organic elements in the sculpture. The seal was a gift made to the artist, while the fruit leaves were placed by him to signal both the work’s liveness and ephemerality. Through such a sculptural and conceptual twist on still lives, the pineapple’s crest acts simultaneously as a battery and a ticking clock: it imbues the artwork with life while acknowledging its doomed timespan.

In this double bind of gifts and trade across distant geographies, living beings and environments occupy a central place. Synthetic materials are often used to evoke the fate of threatened bodies and threatening forces: describing one of the artworks created specifically for this exhibition titled Herbs, mad or weeds watered by sweat, hide many herbal teas, savannah mirages, potions from the woods of chestnuts. In images impression of two dreams, of blue depths, Julien spoke of weeds or bad plants. The sculpture, however, was made of broken pipes, textile scraps, and a whipping rope: the gift, if there is any, is here hidden among “poisoned presents.” The artistic manipulation of these fragments leads to hybrid forms. Through these forms, the artist subtly and poetically probes another aspect of colonial trade: the notion of extractivism—of natural resources, of living creatures, fauna and flora, men and women alike —that was, and still is, a force plaguing former colonies. These themes implicitly punctuate the artist’s latest video work. Against a black background, the video layers black-and-white photographs of various plants over color images of birds and objects. Julien drew over these images, dissimulating some elements under a thick mass of large black and red scribbles that resemble foliage. At times, these collages are interspersed with floating images of small figurines, such as the cowboy which gives way to a stereotypical representation of an indigenous man.

These haunting images are accompanied by a melancholic and soft music written and composed by the artist. Titled Blogodo after a Creole onomatope that evokes brutality and speed, this sound piece mingles English lyrics with bits of Creole. Much like the hybrid forms Julien Creuzet sculpts, the language in which he writes is composite. As such, it is emblematic of the word “créolisation”, forged by one of Julien’s favorite authors Édouard Glissant,. Describing the unpredictable result of intercultural crossings, Glissant gave this term as an “offering” to the French language (“I present to you as an offering the word creolization, to signify these unpredictable extraordinary outcomes, which shield us from being convinced of an essence or being hardened into exclusives (…)”). In the meander of objects and things that compose Julien Creuzet’s work, the discrete gifts similarly counter the idea of “one essence”. Much like Glissant’s créolisation, these works are offerings, signifying unexpected and other possibilities of worlding. 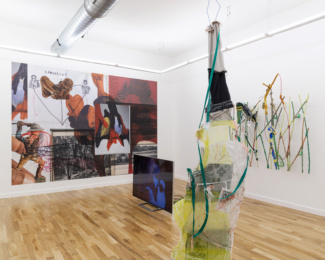 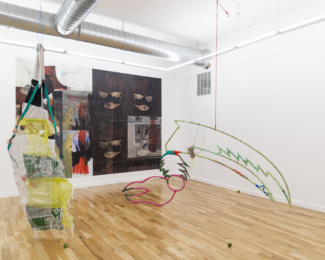 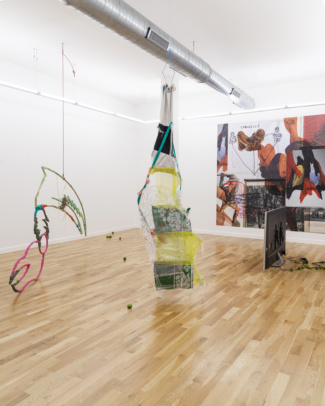 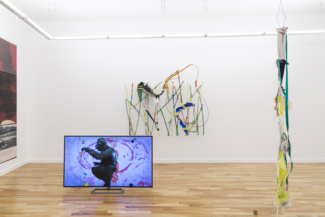 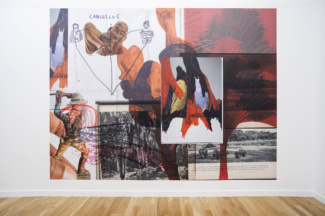 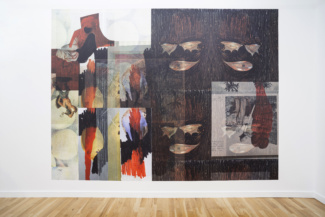 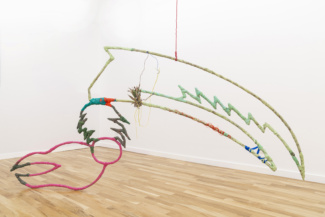 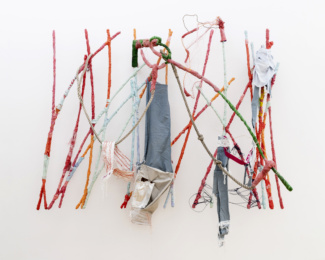 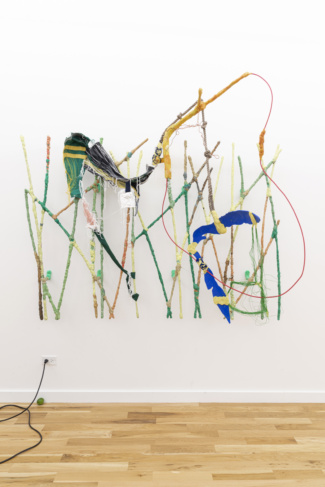 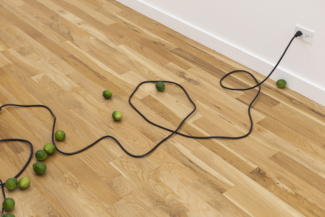 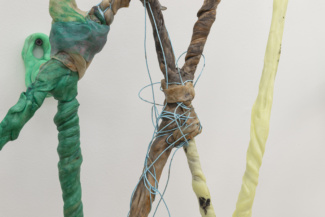 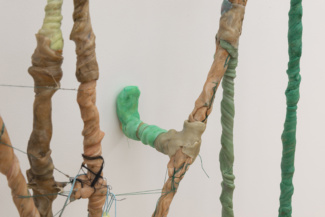 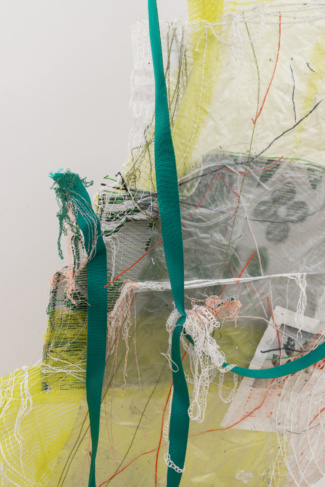 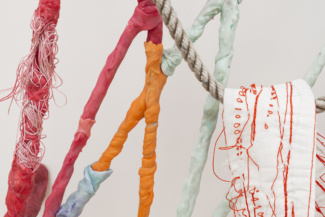 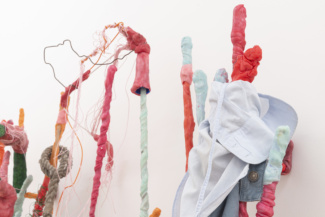 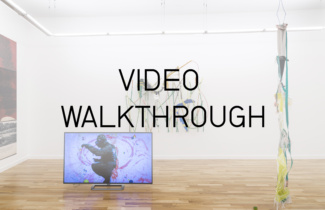