“But this rigorous work, voluntarily without an identifiable brand image, which the artist simultaneously suggests is close to Barnett Newman and to Marcel Duchamp, operates without absolute affirmation, running counter to any demonstrative desire. Dolla is not a lesson giver, he works with uncertainty, he questions the way we look, our point of view as spectators (literally and figuratively). He forces us to approach painting in a multiplicity of possible spaces (frontal to the wall, in the scale of a room or a landscape he presents, on the surface of an object); he makes us no longer consider the activity of the artist solely from the aspect of a production of images, or a simple exercise in style on a flat surface…
Dolla likes to work what he calls his “domestic side”: he uses modest and familiar objects which are those of everyday life for a housewife, the house painter, or angler. This vocabulary, set up since the late sixties, enables him to revive painting by exploring its topicality: the Géant flannel attributed to Chrons on which he wipes his brushes to the point of saturating it with material and colour, tells us as much about painting and its relationship to its time as a work by a master in a museum…”

‘In my work with tarlatan. I make use of resist colouring applied by roller and with overlaid layers from which escape the figuration of my lines, agglutinations, internal rhymes, dilutions, etc…, there too, I appreciate the scope of an object in which what is important to me is its figurality, extension, the reserve or application in the colour-field.

Tarlatan – ‘a very light cotton fabric, loosely woven but with plenty of dressing’ – first appeared in the works of Noël Dolla in late 1969. At the “Supports/Surfaces” exhibition at the Théâtre de Nice (June 1971), bands of tarlatan marked with points were laid out in space like a wave or like a string of lights undulating in the draughts over a space of about twenty metres. Hung along a wall, the colour dyeing the edges of the cotton became the ‘floating, free, fluid frame’ of a canvas freed of its stretcher. Dipped in successive baths of colour, once unrolled from ceiling to floor, the tarlatan revealed its mottled shades (1975-1976). Soaked, unrolled, cut, folded, assembled, glued, it now offered complex compositions of various shapes and dimensions (1979-1980).
In 1972, severely tried and filled with remorse for his participation in the ’72/72 – Twelve years of contemporary art in France” exhibition at the Grand Palais, Noël Dolla closed in on an intimate practice, the making of colourful flies (lures) and photographic work in various cemeteries that would result in the video Love Song (1973-1976). He closed in on himself, but also worked on one of the essential components of painting: colour.
One year after the ‘Admission free but not compulsory’ exhibition at Villa Arson (June-October 2013) and after a year of reflection on his work, Noël Dolla revived an ancient gesture in the form of folds. Folds/wrinkles on and towards a practice left fallow for a long time. Travel, trips/returns, questioning within the problem of turning in on oneself. The recent paintings, purposely entitled ‘Folds & withdrawals’, synthesise, condense, develop and unfold all his earlier experiments and the problem of an artist who has worked for over forty years “in the spirit of abstraction”. 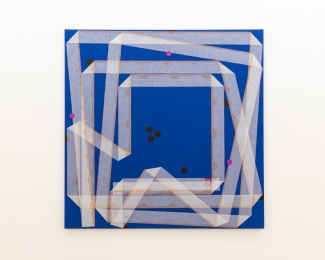 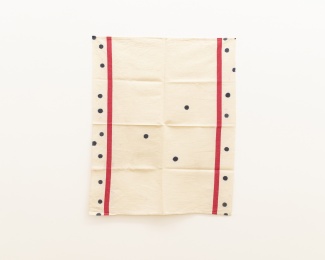