In 1969 Louis Cane’s first gallery exhibition (Givaudan, Paris) consisted of a group of unstretched canvases– sheets in fact, marked only by continuous rubber stamping of his name. He concluded this exercise in personal branding with the insolently tautological series Louis Cane artiste peintre français.
By 1970 Cane was done with youthful irony, inaugurating a genre of cut-out paintings, the toiles découpées, which he would exploit for several years. Like Jackson Pollock or Helen Frankenthaler, Louis Cane painted on unstretched canvas on the ground. But Cane digested the mentor of these artists, Clement Greenberg, as fast as the avant-garde critic appeared in Peinture: cahiers théoriques, the cutting-edge magazine published by Cane and his radical associates.

Cane’s incision in the canvas produces flaps which open a space on the wall. This space is not part of the painting yet remains integral to the picture. Thus, his paintings, which interact with both the floor plane and the wall, investigate the space of non-representation (what is cut out) and integrate it within the painting.
Last century, one saw these paintings as the formalist realization of a praxis. Today we are more tempted to admire the economy of means and the visual polyvalence. Back then, Louis Cane questioned pictorial space by considering Chinese painting. To liberate himself from the conventions of Renaissance perspective without renouncing pictorial space it was necessary to start with discourse. Today only the painting endures, and with it the work’s persisting pertinence. 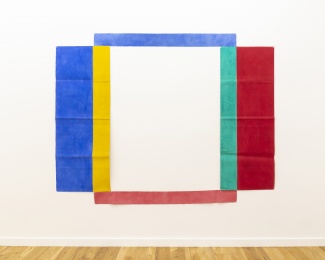 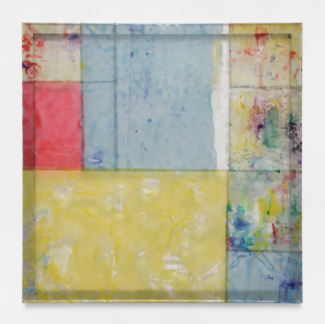