For the 2022 edition of Art Basel Miami Beach, DOCUMENT presents a two-person exhibition of recent works by Elizabeth Atterbury and Gordon Hall. These two artists share a commitment to creating works with simple materials including wood, ceramic, metal, concrete, and cardboard. Each employs color as an integral component yielded by a range of media: paint, pigment, colored pencil and stain. Admixing characteristics of painting and sculpture as well as material and sign, both artists work in close proximity to the social. Yet both also insist on art’s unique potential to disarrange normative codes and gesture toward unmapped futures.

Atterbury’s Third Fan is the third in a series of cherrywood works that use a small fan that belonged to her maternal grandmother, Lily Wang, as a point of departure. The artist scales the sculptures up from their hand-sized source– Third Fan measures more than nine by five feet– recalling the monumentalist Pop of Claes Oldenburg. Grappling with something personal, however, raises quite different stakes for Atterbury. Third Fan approaches the point at which an ostensibly “autobiographical” or “ethnic” sign becomes generalized, but never quite gets there. The fan “works,” in that it can be folded and unfolded, and its craftsmanship is immaculately detailed, arguably obsessive, tethering the individual to the object. A similar oscillation between biography and abstraction operates in Peanut III, which is premised on a childhood gift from the artist’s now departed mother: a larger-than-life size ceramic peanut shell that opens to reveal two smaller nuts snugly nested inside.

A major voice in discussions around “queer abstraction” in the last decade, Hall produces sculptures that bear close resemblances to everyday things: benches, shims, a basin, table legs, a saddle, tools. These are objects whose recognizability is tied up with their possible uses, and this is precisely where Hall heightens ambiguity– sometimes literally. In the past, the artist has choreographed performances that entangle performers’ bodies in various ways with the sculptures. Yet use can also be implied by a work’s very appearance, as in Five Part Bench and Saddle Chair, which conjure the idea of sitting on them even if one chooses not to do so. Leaning Panels (Top Up Top Down) echo the contours of tank tops, in rigid concrete. The title hints at Bruce Nauman’s interest in BDSM innuendo (as in his Tony Sinking into the Floor, Face Up and Face Down, 1973) yet queers this straight, cis predecessor via reference to the tank top, a fashion icon of gay liberation. Leaned against the wall, the panels enact a situation of vulnerability and support that marks these non-human things as affective, or bearing emotion.

Hall and Atterbury are, in the end, not abstract artists, if “abstraction” connotes something fixed or final. Rather, abstraction, as something hovering between our social worlds and form itself, is their incessant operation. 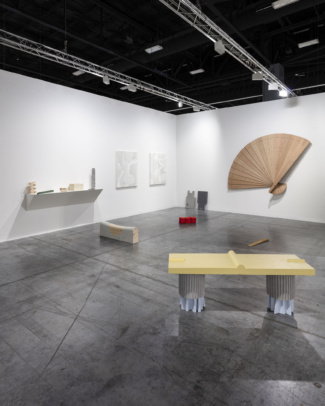 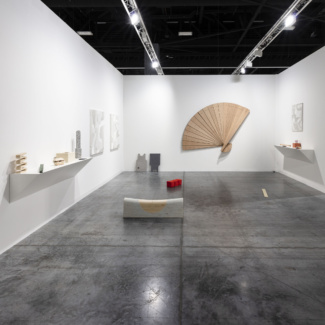 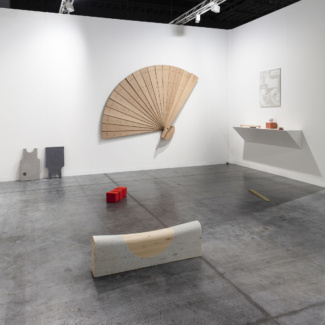